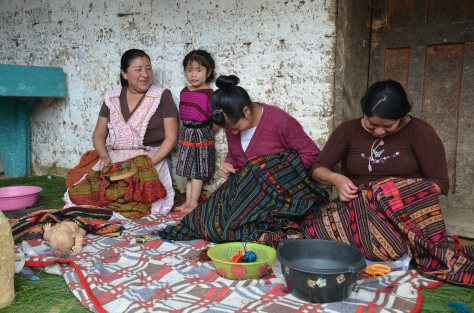 Visiting families living in poverty is not easy. Often I fight back emotion throughout the visit, overcome by the difficult circumstances in which the family is living, then leave with a heavy heart, resigned to the unfairness of their situation. 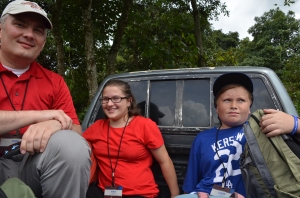 Todd, Anna and Logan riding in the truck.

But the visit to a home in the little mountainous community of Cantón Paxot II in Guatemala was unlike any I’ve experienced.

Our adventure began in the back of a pickup truck, much to the delight of the two teens in our group. We traveled bumpy backroads in the truck, the got out and climbed a narrow, steep dirt path to Santiago and Clara’s home.

There we were greeted warmly by the family, which had covered the courtyard floor with fresh pine needles to welcome us. This is a custom usually reserved for celebrations, and the scent was wonderful.

As we visited with the family, asking about their lives on the mountainside and sharing about our own lives as well, it became clear that this was a strong family, united in faith and love. They were happy to share their lives with us, and wanted to learn about us, too.

Santiago works as a day laborer, while his wife, two sisters and mother sew and embroider skirts to be sold at the market.

Walking up the path to the family’s home.

Clara showed us her kitchen, complete with wood-burning stove and corn boiling in a large pot for making corn tortillas and tamales. The family also has a water filter provided by Compassion and water from a faucet.

Their three daughters, Shirley, 7, Ashely, 5, and Melanie, 3, were quiet and shy throughout most of the visit. Because they are Mayan, the children haven’t learned Spanish well, yet, and speak Kiche instead, so our questions to them were translated from English to Spanish by our translator, then from Spanish to Kiche by their parents. We were told the younger children in the community could only speak Kiche.

Shirley and Ashley are both in Compassion’s sponsorship program, which often indicates special need by the family, as Compassion usually registers only one child per family.

Shirley excitedly showed us the letter she has received from her sponsor. Ashley hadn’t received any letters, yet. 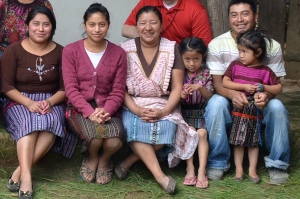 Santiago at right, with two of his daughters, his wife Clara, center, and two sisters at left.

Shirley’s parents proudly presented her report card to us as well. She is excelling in math and a subject called “citizen education,” and she told us she likes school.

During the visit, the women taught Todd and his daughter, Anna, to sew, and seemed pleased with their efforts.

After we presented the family with a gift of grocery items, and posed for group photos, it was time to say goodbye, and Santiago extended an invitation to us to visit again anytime.

And I walked away feeling very positive about this family, with this verse in my mind:

Shirley with her report card.

Clara with her daughters, Shirley and Ashley, in the kitchen.

Clara and her daughters open the gift we brought for them.

One thought on “A Unique Home Visit”