In a trip that was full of new experiences, sights and sounds, filled with emotion, with each day ending in exhaustion, heart overflowing with God’s blessings and love, everything came together in these brief, beautiful moments. I met my boys.

But of course, there was more, and it began with this meeting.

Anxious sponsors listen as Kim, our tour leader, reads off bus assignments before the children arrive.

After much anticipation, a sleepless night, and an early-morning wake-up filed with anxiety and nerves, Aidan and I headed to the hotel lobby, loaded down with gifts for our boys. There we joined the other sponsors on our tour, and listened closely as our leader, Kim, read off our bus assignments.

Five buses would be arriving shortly, carrying our sponsored children, and we were excited to learn that we’d be on the first bus!

Finally, we saw the buses pull up in front of the hotel. The first sponsor from our bus headed out and hugged his children, then they posed for photos. At this point, it was becoming difficult to hold back the tears. I squeezed the hand of the sponsor in front of me, and moments later, she walked outside to meet her beautiful young lady, followed by more hugs, more tears, more photos.

And it was our turn.

I handed my camera to Kim as Aidan and I walked through the lobby doors, and I saw Jose walking toward me. We hugged, I kissed him and cried, and we hugged some more. Then we tried to pull it together enough to pose for a few photos. 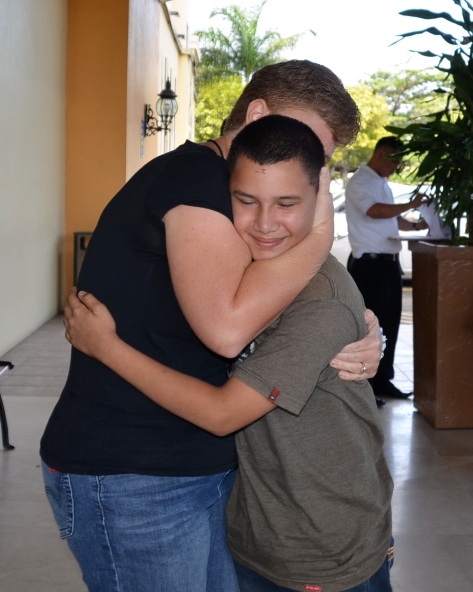 Meeting Jose for the first time.

Aidan, Kerri and Jose after our first hugs.

Before we had a chance to recover, Esteban walked into my arms. The little pudgy 5-year-old, whom I had sponsored almost four years ago, who had asked me to visit in his letters, was now a thinner, taller boy, and hugging him at last was a wonderful feeling.

As soon as we finished our hugs, little 3-year-old Jefry cautiously walked up and greeted me. I only started writing to Jefry at the end of August. In fact, he hadn’t even received a letter from me, yet, and that, along with his age, left him a little unsure of what was going on. But he followed Esteban’s lead, and joined in the celebration, posing for photos after hugs. 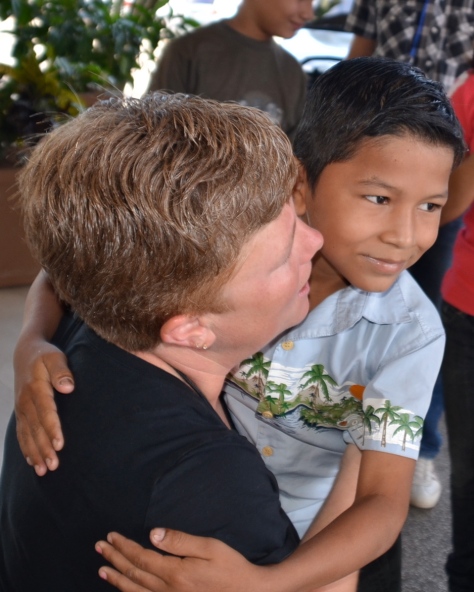 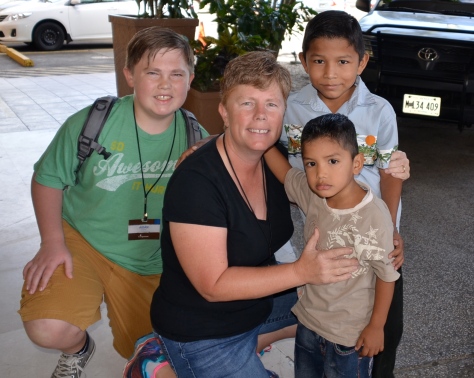 We climbed onto the bus together, where I met each boy’s mother and project tutor, and I must admit, I had to ask for everyone’s names again later because it was all I could do to just be in the moment with my boys, hardly believing I was sitting next to them on a bus in Managua.

To break the ice during the drive to Play Zone Park, I gave each boy the soccer bracelet my daughter had made for them, and a little photo album full of family photos. We all looked through the photos together, Esteban making sure Jefry turned the pages in his album right along with the rest of us.

It was a beautiful start to an unforgettable day.

Seated on the bus, traveling to Play Zone Park.

4 thoughts on “The Meeting”