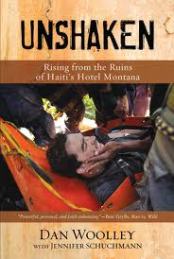 Dan Woolley traveled to Haiti in January 2010, where he was working for Compassion International. He and co-worker David Hames were there to shoot video and photographs documenting Compassion’s work in Haiti.

After a day in the field, the two arrived at Hotel Montana, and as they walked through the lobby, a 7.0 magnitude earthquake hit. The hotel collapsed on top of them.

Woolley survived, but Hames did not.

More than 200,000 people were killed in the earthquake, and more than 3.5 million people were affected.

“Unshaken” is the riveting story of Woolley’s survival. Trapped beneath the hotel rubble, Woolley used the flash from his camera to light his path to an elevator car, where he waited 65 hours for rescue.

He suffered a broken foot, a bleeding gash to his leg and a head injury, as well as dehydration. Alone in the dark, he also battled depression, hopelessness and guilt over a strained marriage and home life. He turned to God for help.

Woolley scribbled emotional goodbye letters to his wife and two young sons in his journal as he spent those long hours thinking he would never see them again.

From the time the earthquake hits to Woolley’s dramatic rescue, his story keeps the reader anxiously engaged.

“Unshaken: Rising from the Ruins of Haiti’s Hotel Montana,” is written by Dan Woolley with Jennifer Schuchmann contributing.

For information on Compassion’s ongoing work in Haiti or to sponsor a child in Haiti, go to Compassion’s web site at http://www.compassion.com.